So I was having some people over for dinner and wanted to whip up a quick dessert.  I had some cupcake mix but that's so plain.  What else did I have in my fridge?  Lots of eggs and some cream.  So with inspiration from these pictures, what did I do but try and make some different styles of creme brulee cupcakes!

Since the cupcake pan has 4 rows, I also tried a normal cupcake batter row and a normal creme brulee mix row. 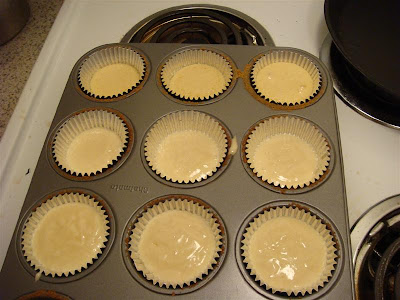 Here we can see the different cupcake mixes.  The top row was baked for about 5 minutes at 350 degrees F.  The middle row and third row are just cupcake batter and the fourth row has nothing in it yet.

As for the creme brulee mix, I used the first few steps of Alton Brown's recipe (except I didn't have a vanilla bean so I just put in some vanilla extract).  I think it was a mistake to use a hand mixer because of all the bubbles created, but I didn't feel like beating everything by hand with a whisk, so oh well. 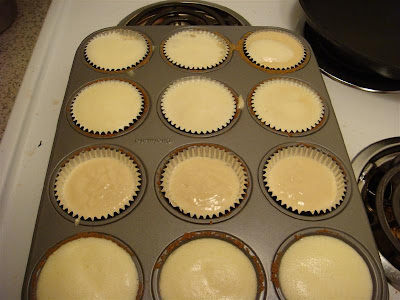 Then I proceeded to bake the cupcake platter placed inside a cookie sheet that was half full of water, approximately 30 minutes, until the creme brulee in the fourth row looked set. 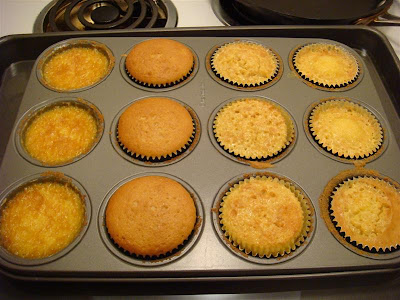 A very interesting set of cupcakes, indeed.  As would be expected, the second row looks most mixed.  The creme brulee mix doesn't seem to have sat on the top of the first row, though, probably due to not having baked the underlying cupcake batter enough at first. 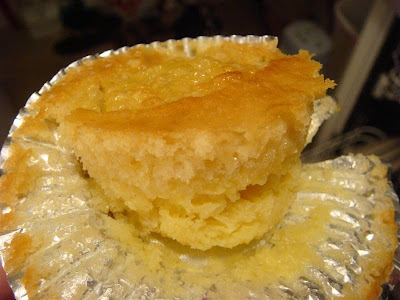 A cupcake from the first row.  Oddly enough it looked like the cupcake batter floated to the top around the edges and at the bottom is more of a pure creme brulee mix.  Even though it might not look that appetizing it was quite delicious. 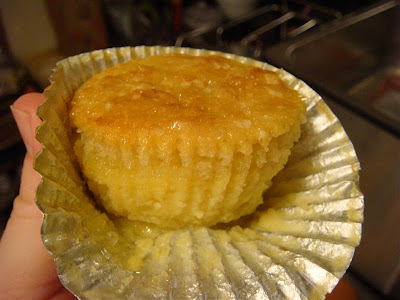 This is a cupcake from the second row.  Much better integration between the creme brulee and the cupcake batter.  This was my favorite by far.  It tasted like a creme brulee flavored cupcake and was super moist. 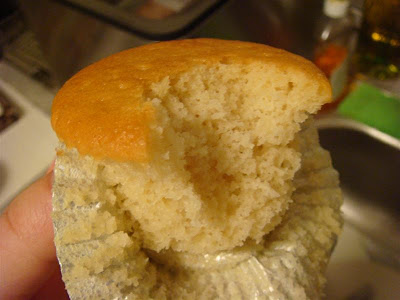 A normal cupcake from the third row.  I think baking it in a water bath created more steam in the oven, which led to a thicker, more pronounced crust on the top.  The crust also seemed stickier, like it retained more moisture.  Interesting, although I think I'd rather have a normal cupcake in this case.

Overall they were very delicious, as any concoction of egg, sugar, and cream is likely to be.  But I definitely preferred the row 2, mix all at once creme brulee cupcake.
Posted by thranos at 11:41 AM 6 comments: