Because I've been using sous vide to cook a lot of meat lately, invariably there are leftovers.  So I asked myself, what's the best way to reheat the meat?

Probably the absolute best way would be to bring it back to serving temperature in a water bath.  But that seems like it would take too long.  And waste too many of my plastic bags.

Instead, I decided to try out 3 different methods:
Here we have 3 pieces of meat straight out of the refrigerator.  You can see the congealed fat (yum!). 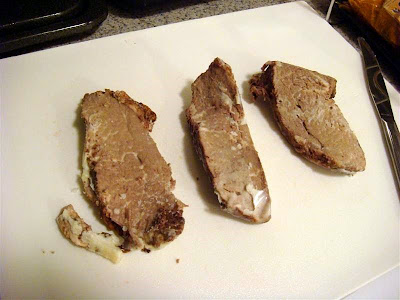 Here are those same 3 pieces after each has been reheated according to one of the methods above.  Can you guess which piece was reheated in which manner? 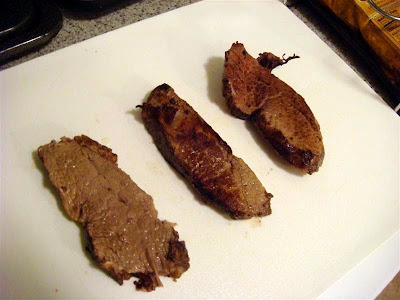 The microwave method took about a minute.  I was afraid of overcooking the meat before heating it to a good temperature since the slices weren't that thick to begin with.  After 30 seconds in a rotating microwave, some of the congealed fat still hadn't melted, so I did an additional 30 seconds.  I heard it pop the second time, so I'm thinking maybe 20 seconds, rest, 20 seconds might be a good amount in the future. 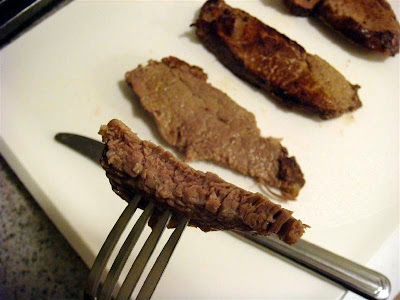 The pan fry method took about a minute on each side once the pan with some butter had been heated to medium low.  I actively pressed down on the meat a bit to create some extra crust.  It certainly smelled delicious. 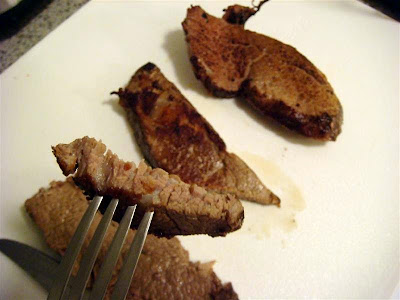 The blowtorch method took all of 30 seconds.  I torched each side for a little while until it looked like the fat on the outside had all melted and the piece browned a little. 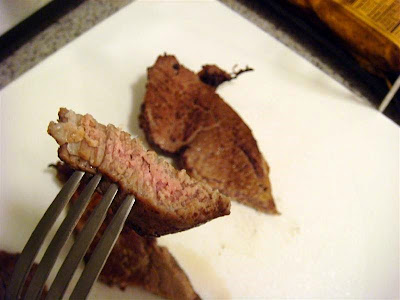 Sadly, the blowtorch method failed to produce a better crust than the pan fry method and also failed to reheat the meat entirely through.
Posted by thranos at 10:58 AM